GOAL CLICK Giving people all over the world a chance to show what football means to them...

“Telling stories from a first-person perspective, getting out the way and giving full power to what would normally be the subject of a story, but letting them be the storyteller.”

Speaking to Off-Field in the days before heading to Russia, Goal Click founder Matthew Barrett exudes pride in an original concept that has progressed from passion project to full-time consideration inside one World Cup cycle. For while he may have enjoyed Brazil 2014 from his London home, this time around he’s in Moscow showcasing the latest collection following four years amassing photographs from all over the world, taken by amateur photographers with a story to tell. At the heart of each tale, is football.

Goal Click’s success lies in its simplicity. Barrett and his team send disposable analogue cameras to people all over the world to capture the game as they see it. The cameras may be cheap and the photographers untrained, but the results are remarkable.

“The cameras cost £4. Just those wedding-style cameras – super cheap, super simple. But it’s quite nice that the entry point that binds everyone together is the use of a disposable analogue camera. It’s a real leveller. Part of the reason we want to use analogue is it’s equality in action, everyone has the same tool and they are really simple to use. So, no training required, no skill required. In fact, I’d say sometimes the most untrained people do the best stories.

“As corny as it sounds, the photos are glorious in their imperfections. It’s a great summation of what we’re doing. It’s about that first person native viewpoint, about their story. The photos don’t have to be perfect, and actually the beauty is in how raw they are.”

With only 24 shots to take, the project also harks back to a pre-digital age when the concept of burst photography would have been considered a waste of precious film. Goal Click’s galleries instead represent an ode to photography’s original winning formula; a fine balance of patience, consideration, and capturing the moment in one shot. It’s a setup Barrett’s amateur photographers appear to thrive on.

“The cameras we get back, where someone has taken months and thought about each shot individually, have been the best photos. Our Indian photographer was a 14-year-old girl called Blessy, and she wrote down the 24 shots that she wanted to take before she took them. Clear thought. And they came out great.”

“Our Russian photographer, Sergey, travelled around seven cities in a region and took a couple of shots in each place, and each shot is completely different and tells a story in its own right. I think the results come from that time and patience and waiting for the right moment. Russia’s a fascinating country and the photos he took look uniquely Russian.”

Ultimately though, Barrett is keen to stress that the photography is only intended as the vehicle to arrive at Goal Click’s main destination: the stories. After receiving each film from his photographers, he sends back the developed photos digitally before speaking to them about each photo. He insists on only asking vague questions to allow them to tell their story in their own words.

“Sierra Leone will always be very important to us, because it was the first camera we ever got back. Pastor Abraham Bangura was our photographer, the coach of the national amputee soccer association. And the first photo we ever developed was the now quite iconic one of the team coming towards the camera on their crutches. It set such a high bar for everyone else that followed. It’s the camera with the greatest shots on it, and the fact it was our very first one means it’ll always be very special to us.

“I love that our Mexican photographer doesn’t really like football and he went to a game to show the militarised nature of Mexican society through football. There’s a great photo of a university band playing, with police in the foreground and a row of snipers above them on the stand, which I think really encapsulates that juxtaposition between football and police militarisation.

Barrett describes Goal Click as a social enterprise, and as such they work closely with charities and NGOs such as Common Goal and Street Football World to give a platform to stories and causes in regions where the global media narrative has long moved on from.

“The stories behind the Iraq and Rwanda photos are really powerful and they bring the photos to life even more through the story. The Iraq photos were taken in 2015, on the border of Islamic State in Kirkuk, and it shows male and female coaches and children playing football at a time when we couldn’t reveal the identity of our photographer because of the political situation. It was very powerful to see female coaches coaching kids of all ethnicities and genders amidst the environment they were in with Islamic State 30km away.

“And then the story of the Rwanda camera is about Football for Hope Peace and Unity, an organisation set up by Eric Murangwa, who was captain of Rwanda in 1994 when the genocide broke out. He was Tutsi, lost 35 members of his family and was only spared as a result of him being the captain of the national team. His club president – a leader of the Hutu militia and later indicted on war crimes – wanted Eric to play in goal for his team after the genocide. Those stories in support of great photos are very powerful and mean a lot to us.”

View a gallery of photos below, described by Goal Click photographers in their own words. 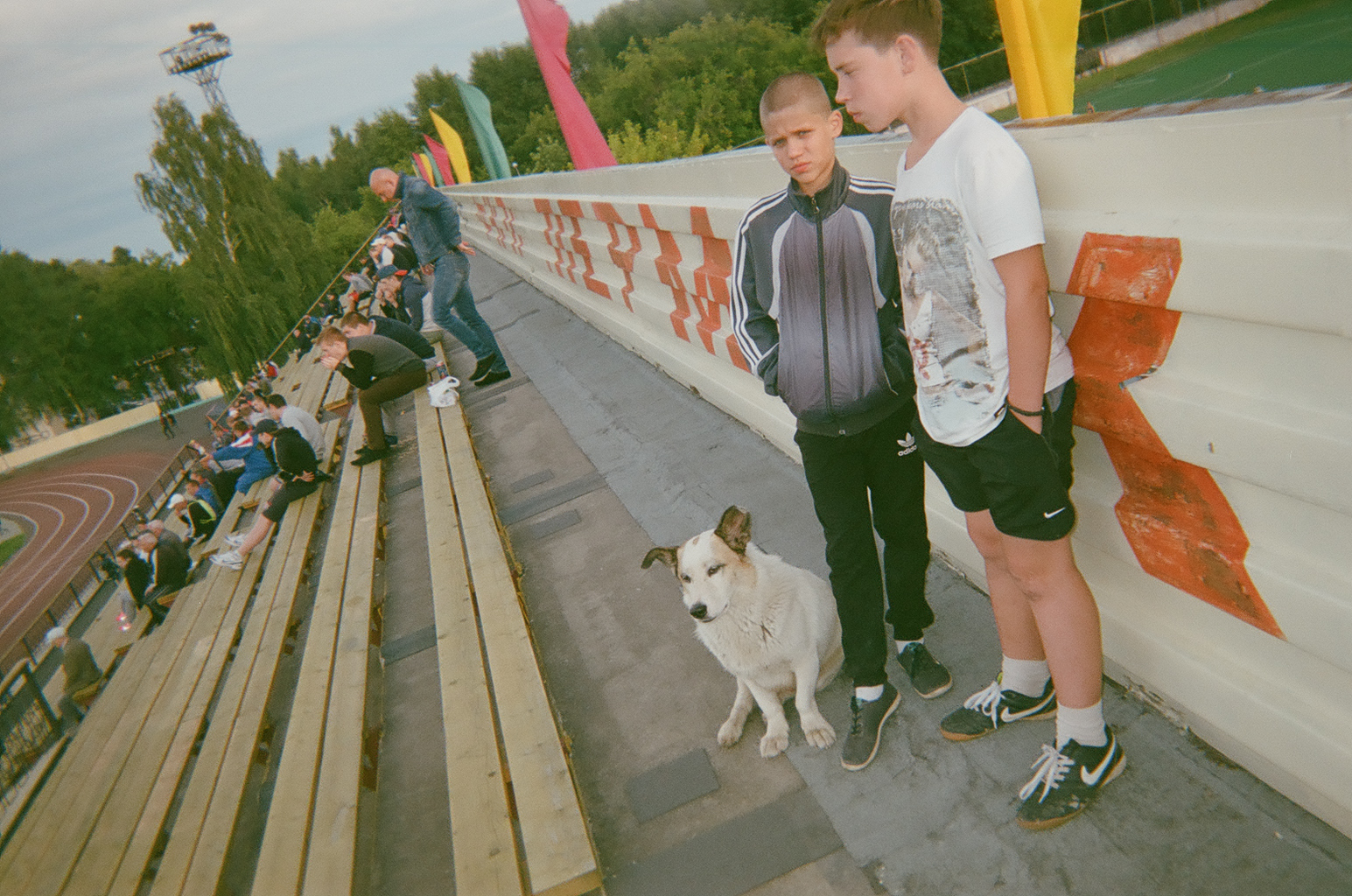 “The main economic activities in The Urals are mining and metalwork, which deeply impact social life and football. The economic crisis in the country affects many parts of football, including financial support of the teams, the condition of pitches and even the availability of medical care at the stadiums.”

“Just two cities in Russia attract the money, Moscow and St Petersburg. All other cities, towns, regions and countryside are quite poor. Life there is like 30 years ago in Soviet times. They have the same stadiums, the same citizens, the same interests in life and the same beliefs in politics and economics.” 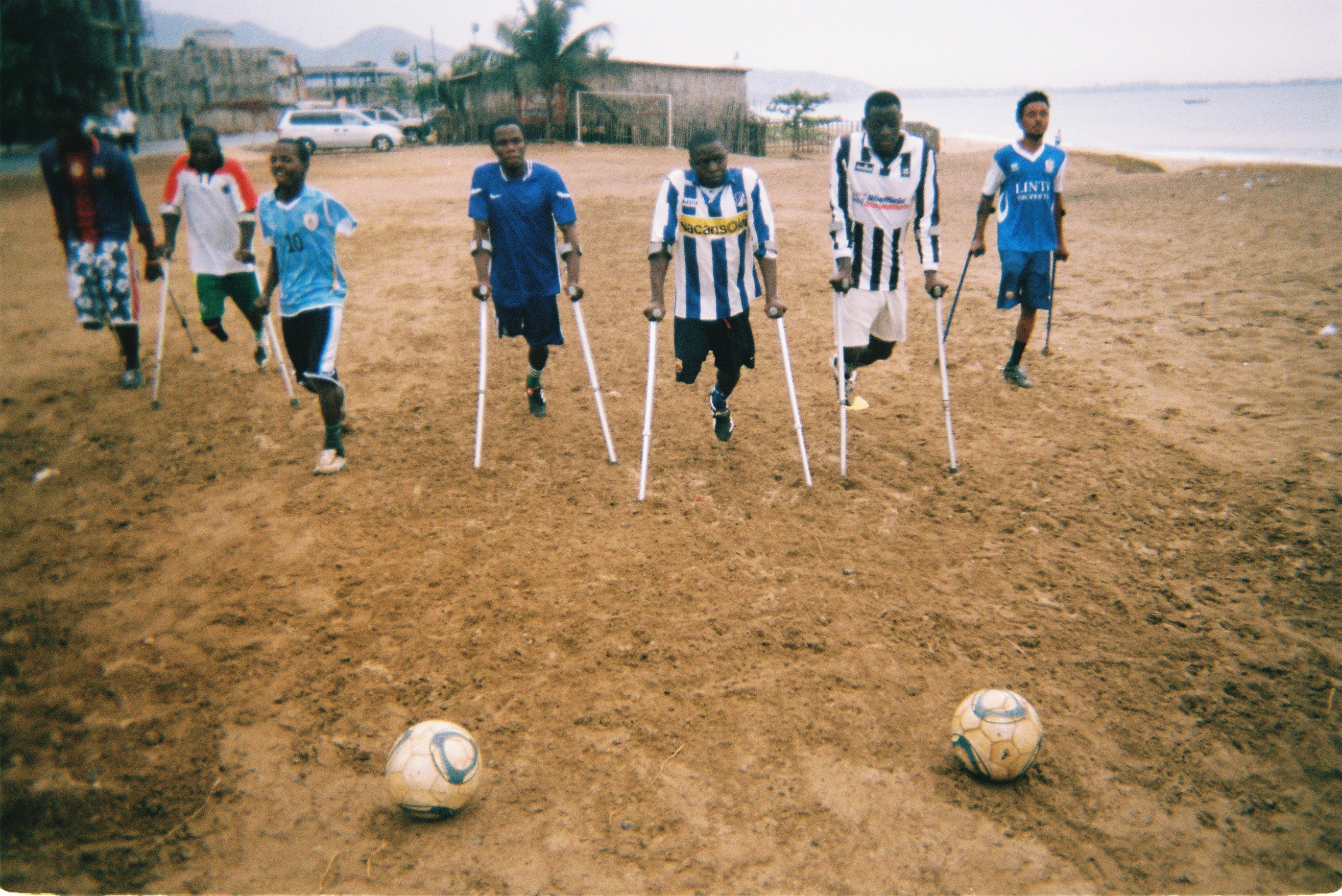 “There are times I think about the senseless war that took place in our country, it makes me want to shed tears. One of the main things I was trying to showcase is that disability is not inability. We are not just teaching them about football, we are also building capability, such as giving them loans to do microfinance. We want to see the amputees coming out on the streets, with skills, and then be somebody in society that society will recognise.”

“For us to turn their pain into power, we needed to start this amputee football.” 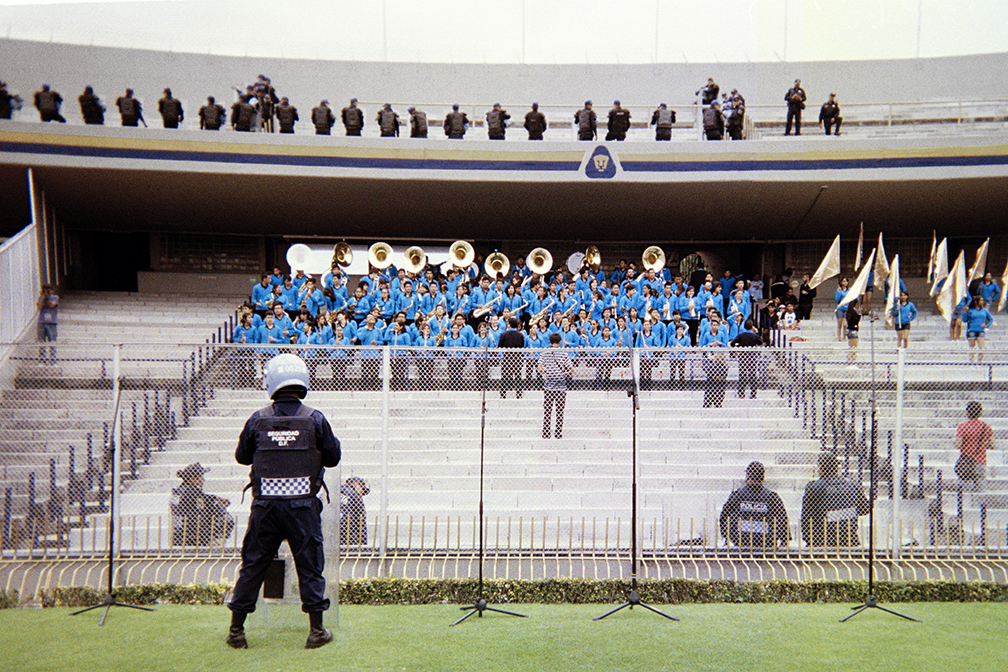 “In modern-day Mexico armed grenadiers in the street have become a common scene. Football matches in Mexico City tend to get violent, especially if the home team loses. Therefore the city government has been sending the police for every match to keep order.”

“Football often represents the social and political stance of a country, as well as the idiosyncrasies of the people. I believe that Mexican football is a fair representation of contemporary Mexico.” 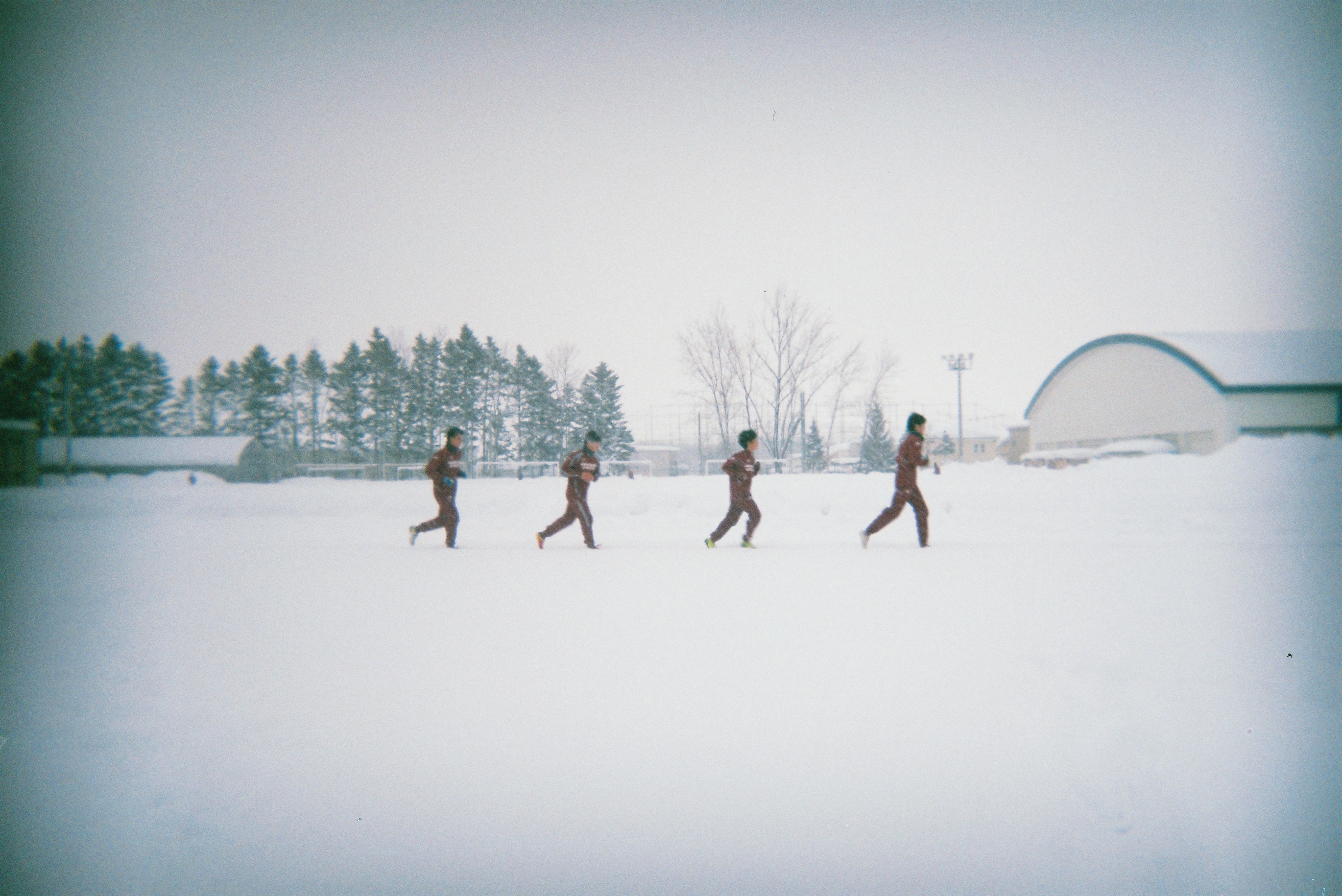 “It’s not easy at all to play in these conditions. If the snow is deep, it’s like playing on a beach. When the snow is packed it’s quite slippery, even if they have football boots on. These scenes are typical for schools where it snows a lot, but schools with money will be able to train inside the gymnasium.” 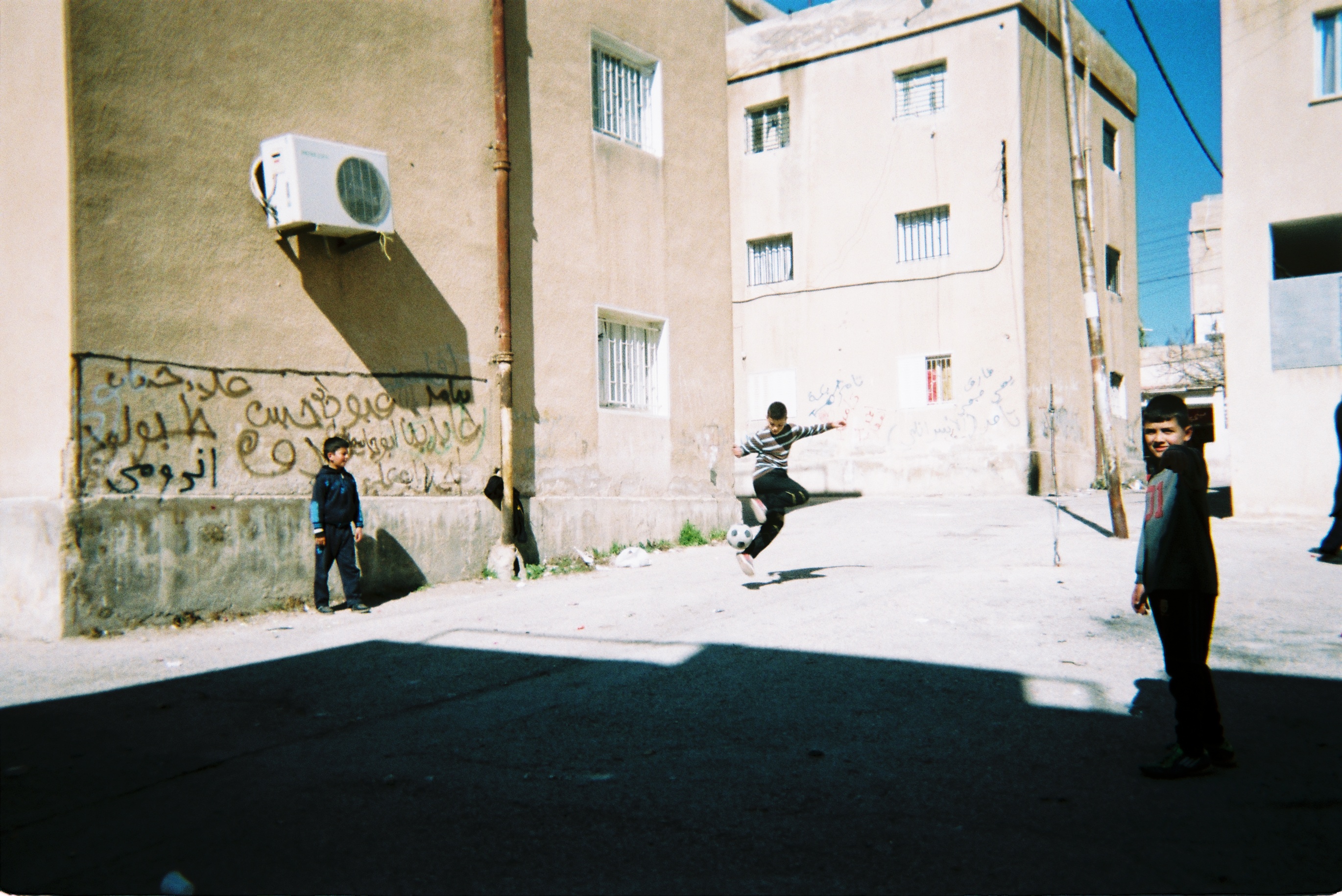 “The photos show kids from different families in my neighbourhood playing street football. Many have Palestinian heritage. The photos are meant to show that even without proper football pitches and regardless of the environment we can adapt and our love of football prevails!” 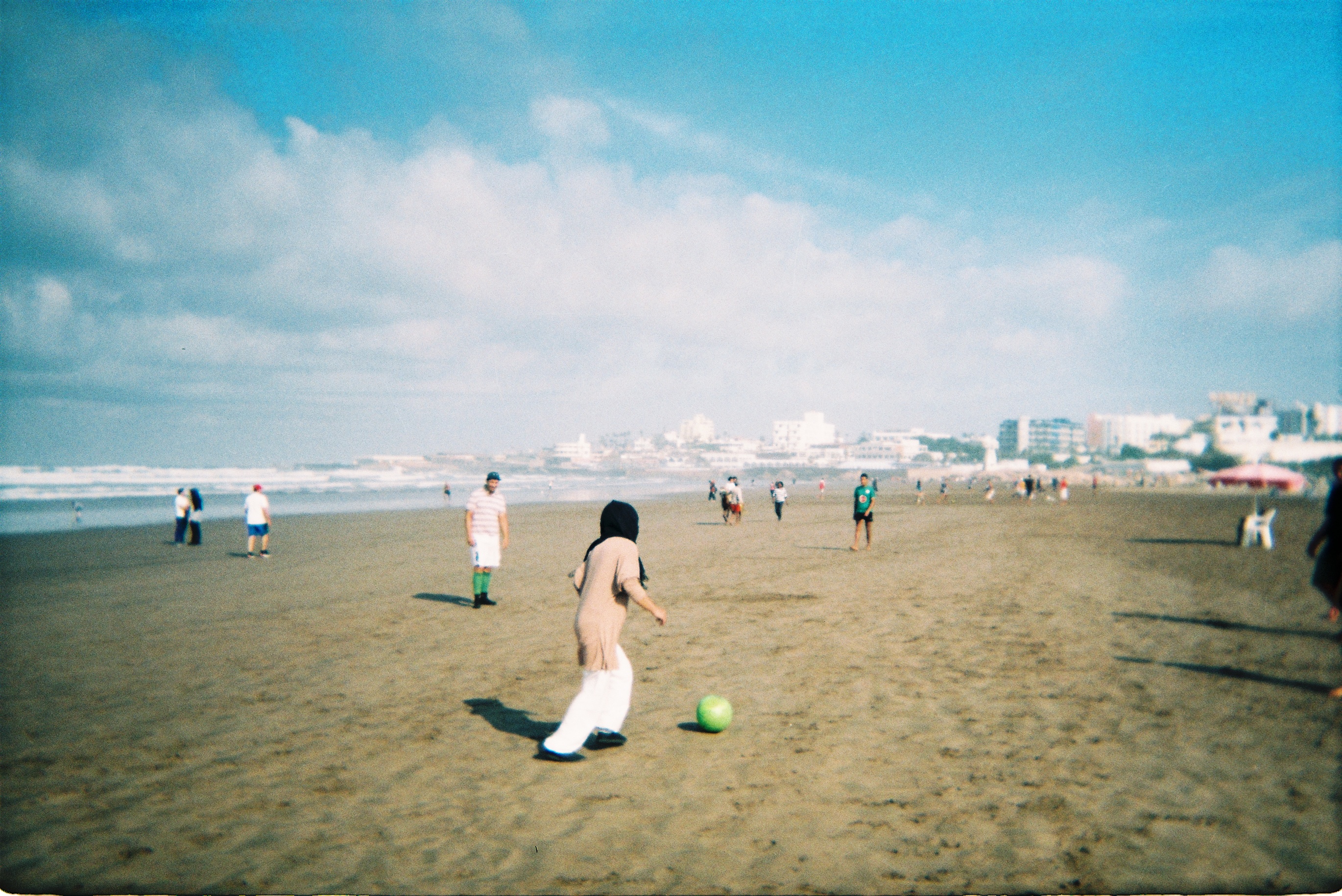 “In Morocco women footballers say that some members of their family and neighborhood still judge them. Some say they are masculine women. Others claim that it is “haram” – forbidden according to their interpretation of Islamic law. However, Islam allows women to participate in sport. A healthy body and mind in Islam is a gift from God – there are ‘duties that you owe to yourself and rights your body and your mind have upon you’. Islam allows women to exercise and to play sport.” 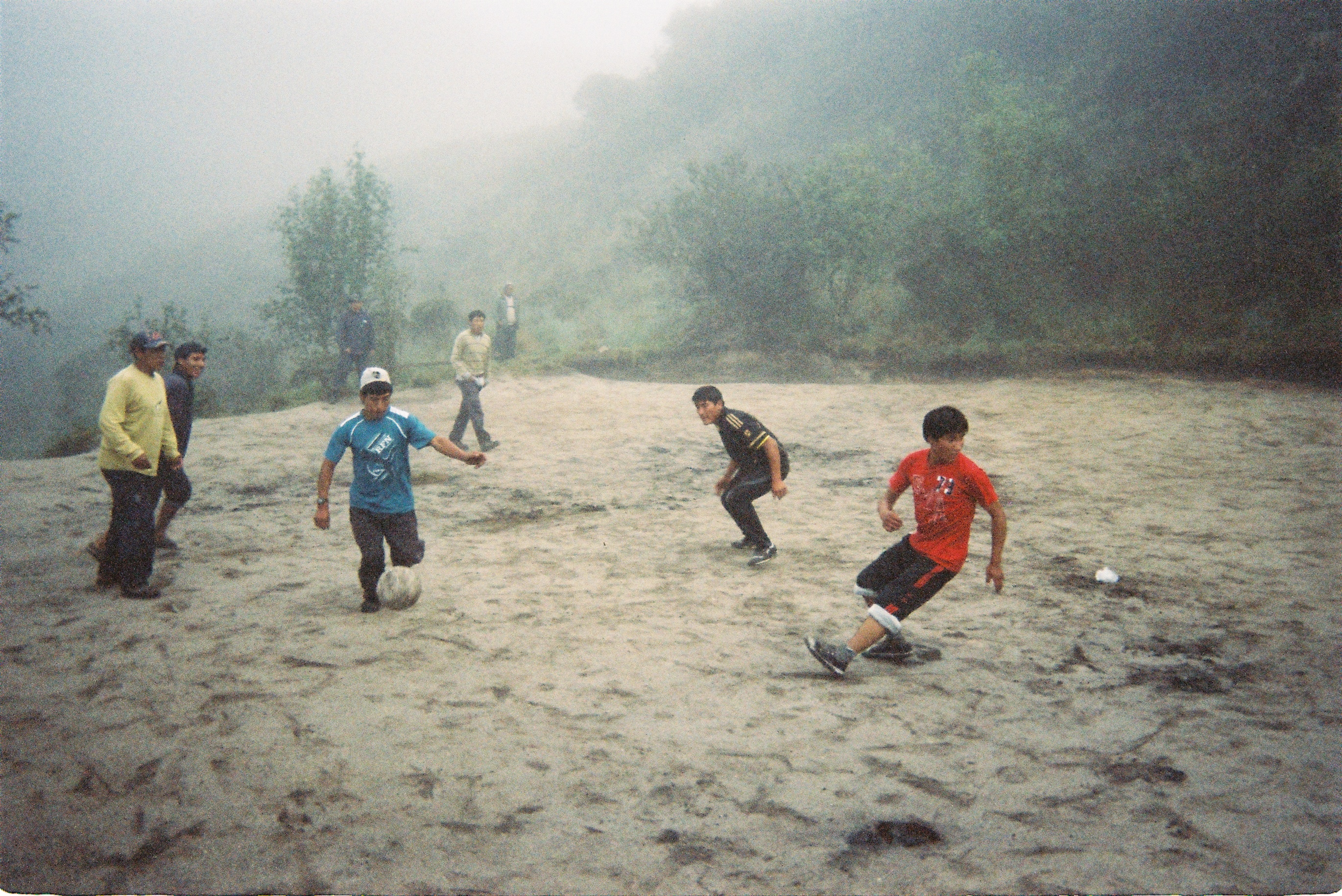 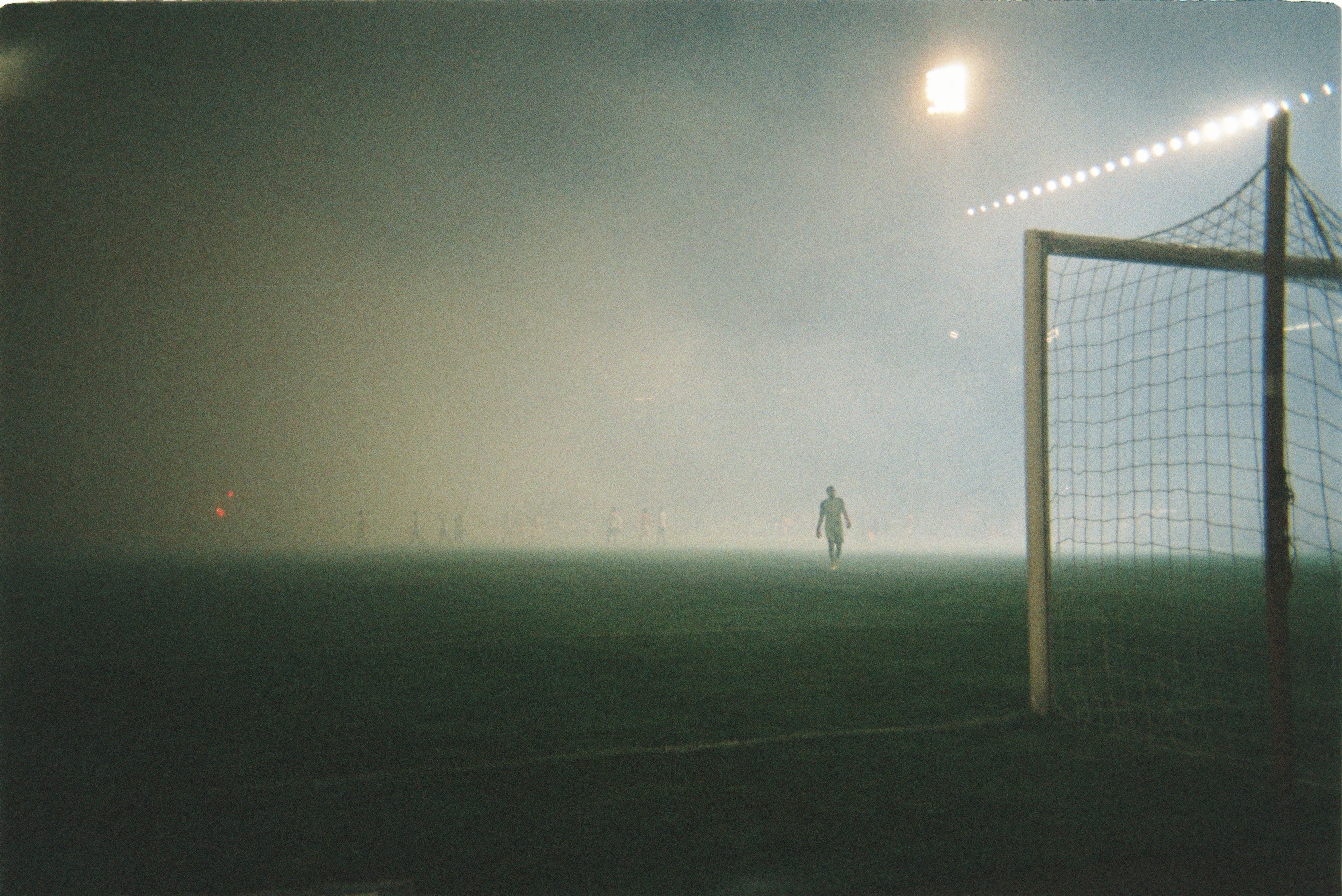 “I tried to capture the key elements that are present in a Belgrade Derby between Red Star and Partizan, especially the colour and atmosphere. There is a name in Serbian for when a stand lets off multiple flares; it’s called a bakljada. The red smoke of the flares has a menacing feel.”

“After an amazing flare display by the Partizan fans, the smoke covered the ground and stopped the game for ten minutes. You can see the floodlights at the top breaking through, the keeper looks like a lone soldier walking back to his net and two flares are also lit up in the background. I feel it captures the atmosphere. You do not even see the fans but you definitely know something has happened there.” 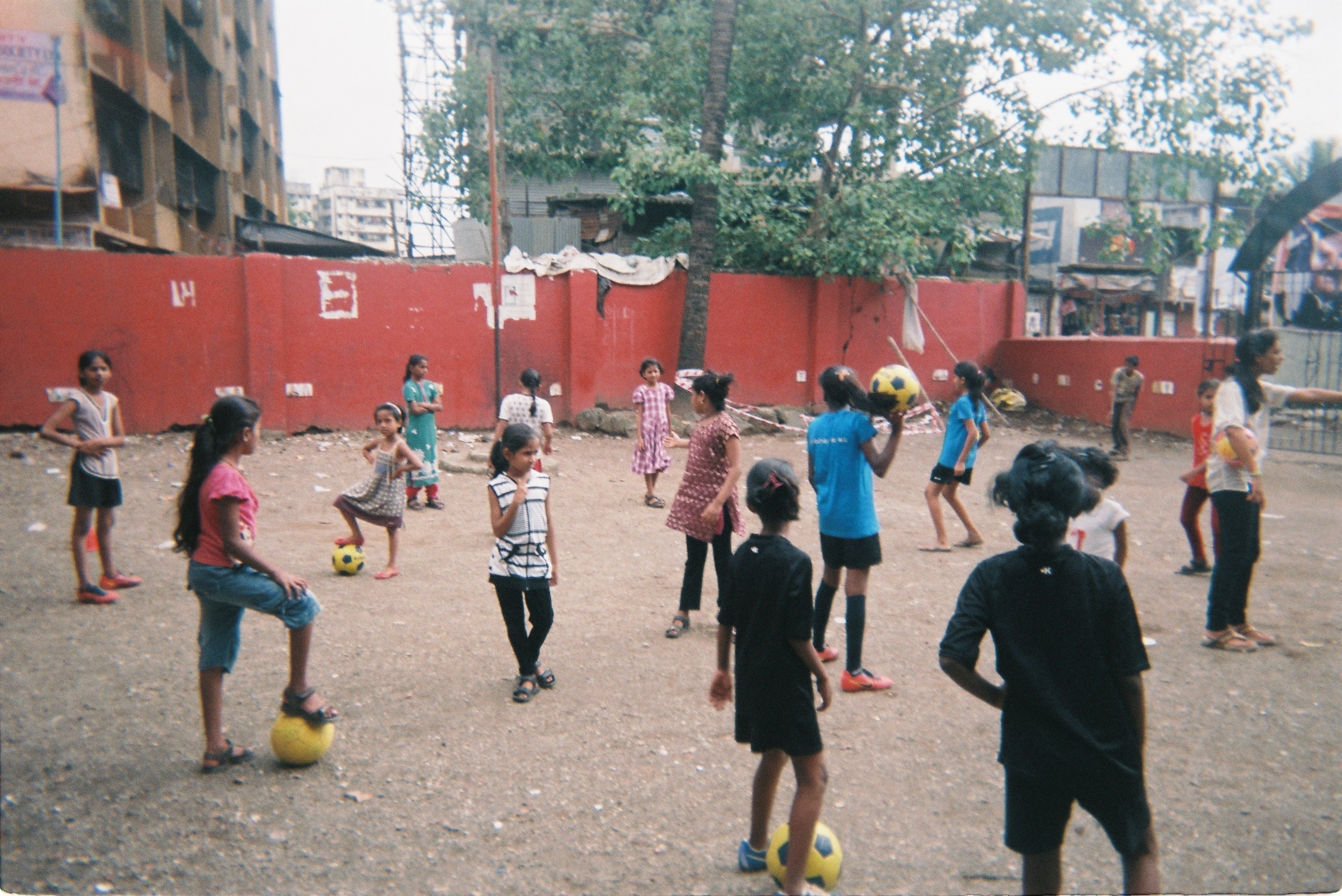 “I wanted to show that Indian girls can play football. I think that all girls who want to play games, not only football, should be allowed to. In India there is a mentality that girls are not going to play, girls are only working at home. And then they are married. But I think all girls want to play!” 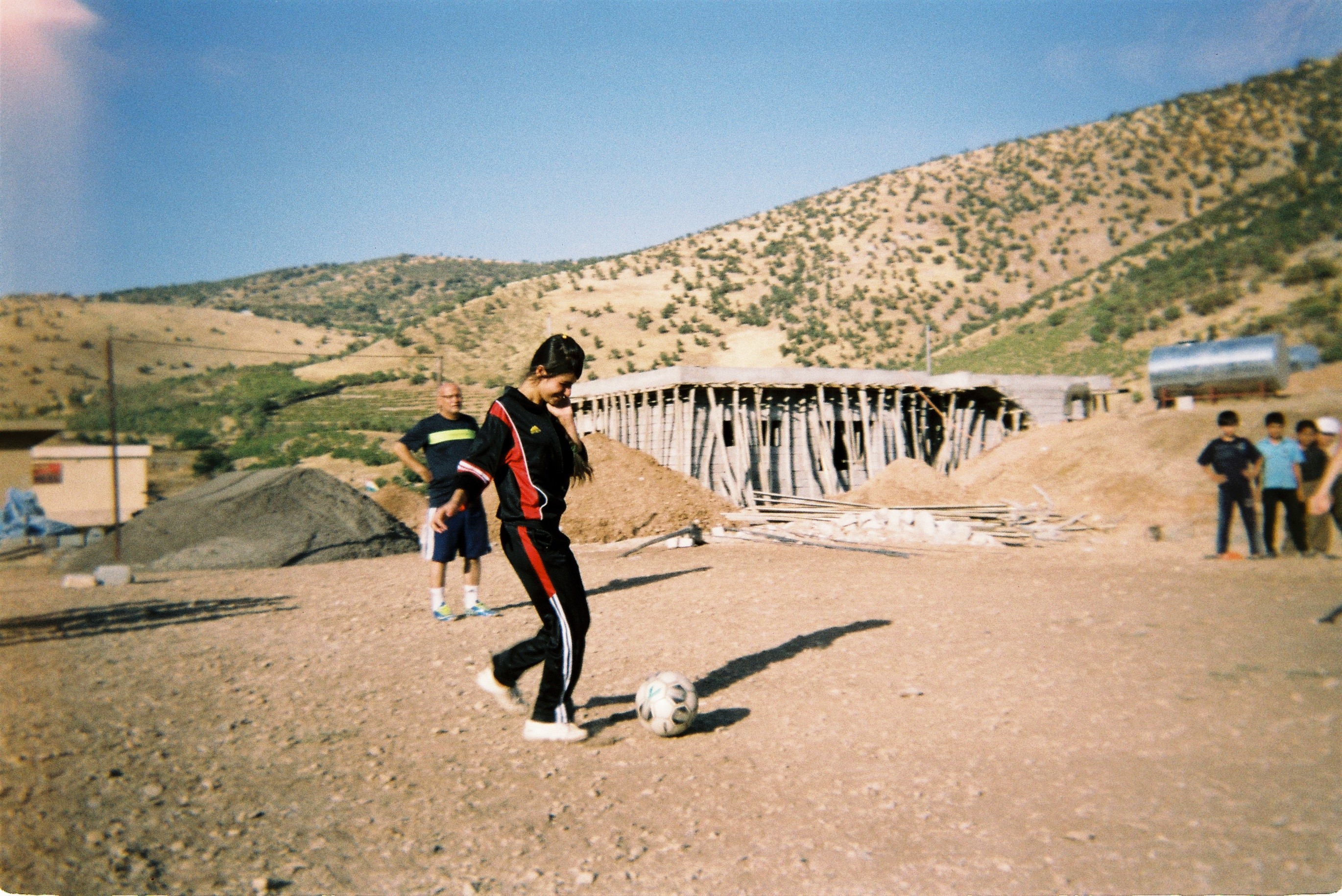 “The most popular game in Iraq is football, and it is the only game that can unify the Iraqi people. When the Iraqi national team wins, all the people celebrate regardless of religion, gender and ethnic background. This is the role football can play.”

“Security is the main challenge. In areas of Kurdistan occupied by Islamic State nobody could play football anymore. Spirit of Soccer stopped activity in these areas due to the occupation and our coaches became Internally Displaced People (IDP). But when the Iraq national team came 4th in the Asia Cup in February 2015 all the people of Iraq celebrated together.” 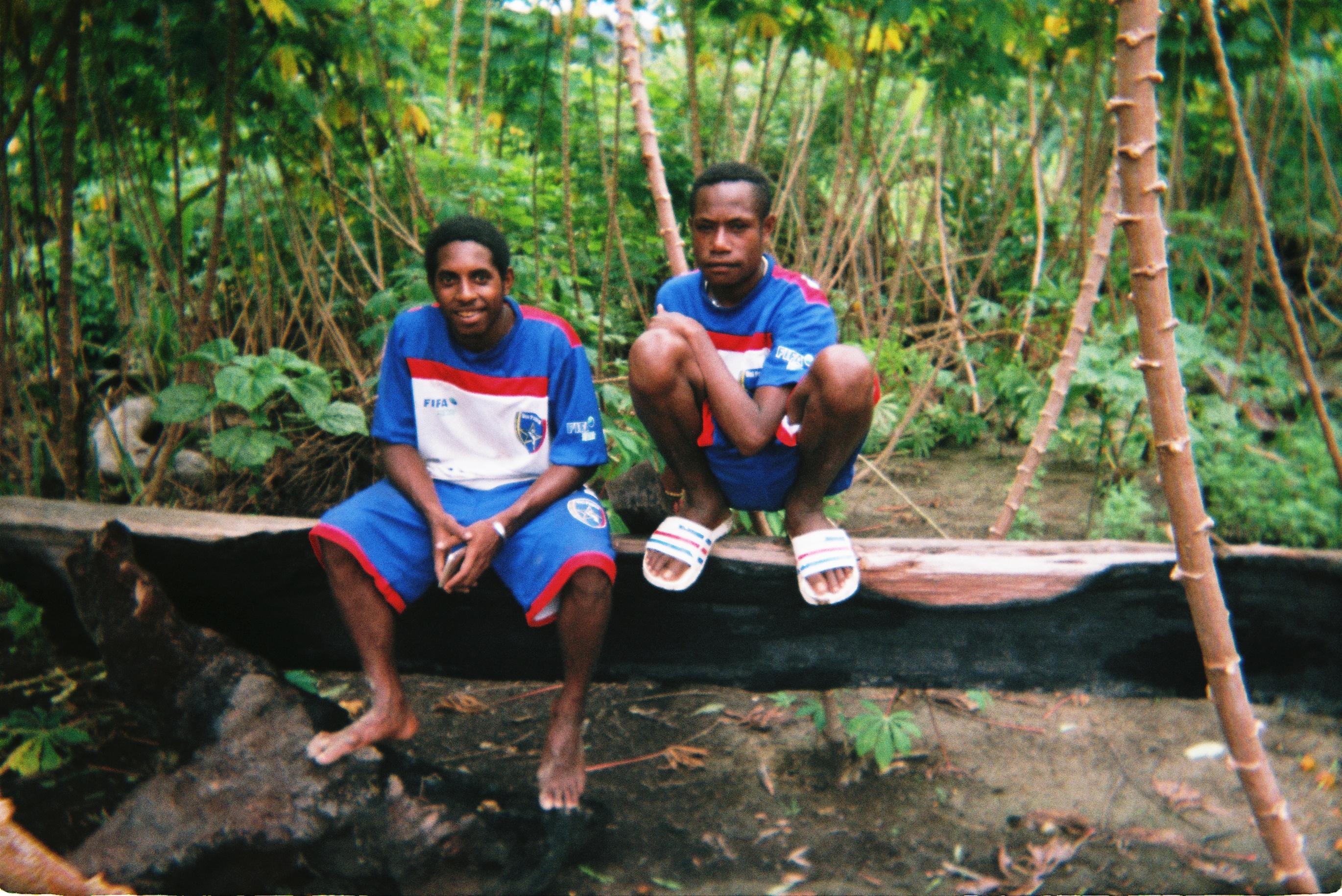 “Football is a language. When we cannot speak a local language, football speaks for us. The Elseng tribe cannot speak or understand Bahasa Indonesia. But when we meet and play football, there is a connection between us.” 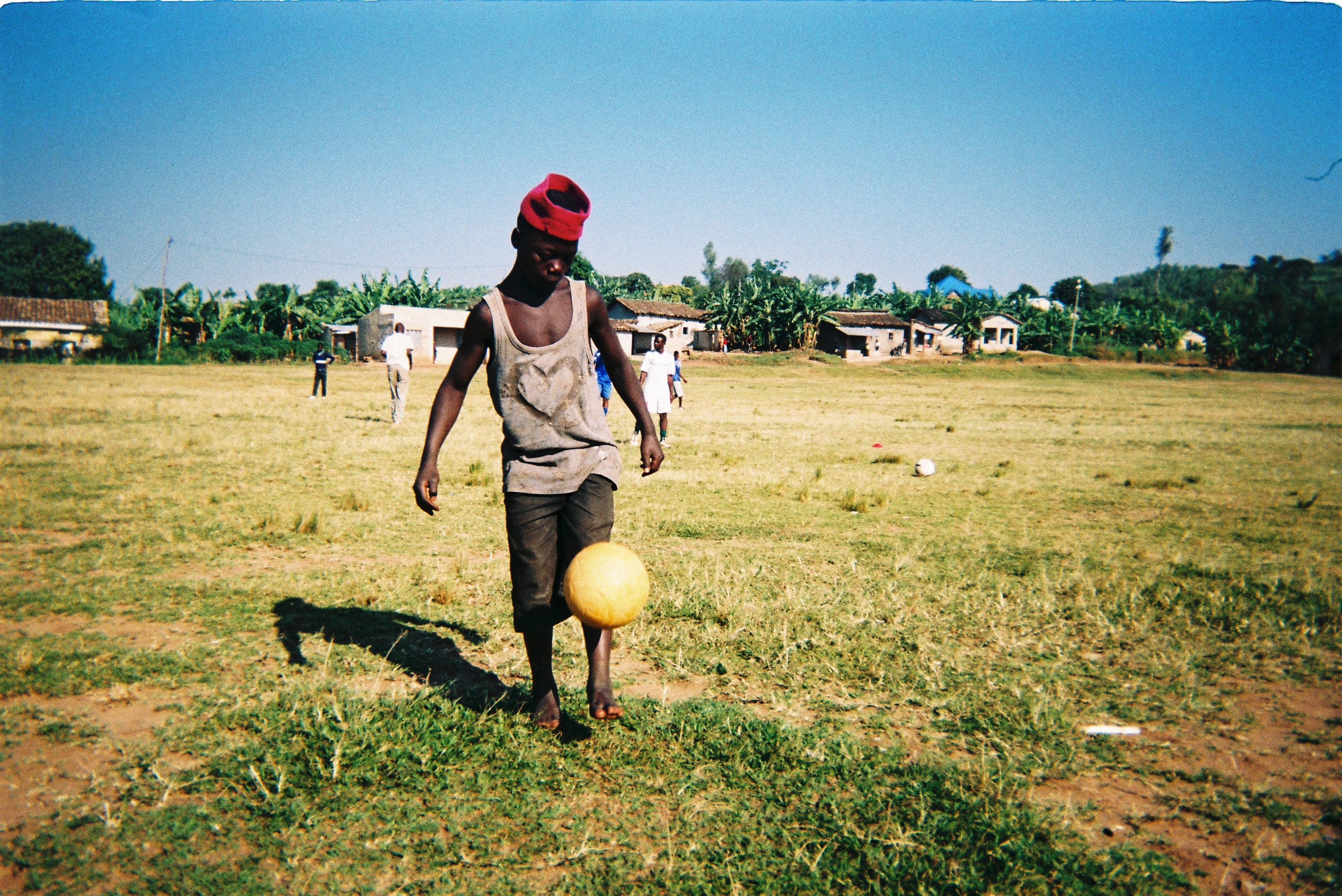 “FHPU was founded by Eric Murangwa Eugene, former captain of the Rwandan National Football team and a survivor of the Rwandan Genocide against the Tutsi in 1994. During the Genocide Eric lost 35 members of his own family including his youngest brother, who was just 7 years old at the time. He owed his survival and that of his family to the protection they received from fellow members of his football club Rayon Sports F.C. This included Rayon board member Jean-Marie Vianney Mudahinyuka, otherwise known as Zuzu, a notorious leader of the Interahamwe militia – a man subsequently imprisoned for his role in the genocide. Eric often says football saved his life.”